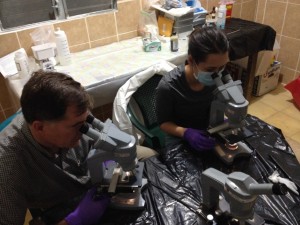 In conjunction with the UTHealth S.I.G.H.T. medical brigade, in March 2014, seven medical students conducted a research study under the advisement of faculty from the National School of Tropical Medicine at Baylor College of Medicine and the University of Texas Medical School at Houston. The research was conducted as a pilot study with two goals: to identify the prevalence of gastrointestinal parasites affecting the Santa Ana community and surrounding area, which has not been published for this region of Honduras prior, and to immunologically describe the mediators hypothesized to be responsible for protection to the worm infections, specifically Trichuris trichuria (whipworm) and Ascaris lumbricoides (roundworm). Both objectives, important from a basic science and clinical approach to controlling these endemic infections, also serve in the quest towards the development of a vaccine.

In partnership with the Sabin Vaccine Institute, one of the major aims is to develop a pan-helminthic vaccine against soil-transmitted helminths (roundworm, hookworm, and whipworm), which combined infect nearly two billion of the world's poorest people. During this pilot study, stool and blood samples were collected from eighty-one volunteers in the community. The follow-up is for a large-scale study, including more participants and collection of immunological cells that will play an important role in development of a vaccine, as well as provide a new body of scientific knowledge to describe the role of these widespread and devastating diseases.. This work was supported by the community of Santa Ana, The Houston Global Health Collaborative, Caring Friends, UTHealth, and BCM.